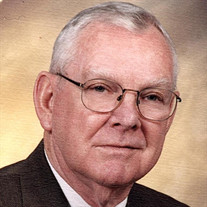 One of East Texas kindest men, Archie Nelson Barron, graduated to heaven on August 10, 2017. A memorial service will be held at First United Methodist Church of Hallsville at 1:00 p.m. on Monday, August 14, conducted by Reverend Brian Brooks and Reverend Shinia Kelsey. The family will receive friends prior to the service at 12:00 noon. Archie was born to Archie M.C. and Ona Frances Barron on June 12, 1931, in Mena, Arkansas. He graduated from Acorn High School, where he was president of his senior class, ran track, and played basketball. After graduation, he attended Arkansas State and graduated from Southern State in Magnolia Arkansas in 1954 with Bachelor of Science in Agriculture Economics degree with a Minor in Chemistry. Later, working on graduate courses at University of Texas Tyler, he met his future wife, Sally Gossett Barron. Archie began his work career in 1955 as a chemist and industrial engineer for Dowell, a division of the Dow Chemical Corporation. In 1963 he transferred to Dow Industrial Services and moved to Longview. In his work, he had three patents related to improving oil well production. In 1962 he wrote an article on the effect of flow on acid reactivity in a carbonated fracture that was published in the International Journal of Petroleum Technology. Later he worked as a quality control supervisor at Petrolite in Kilgore. Archie’s passion was helping other people. He ended his career working as a Student Assistance Counselor at Hallsville ISD and other schools. He retired from the East Texas Council on Alcoholism and Drug Abuse serving as a Licensed Chemical Dependency Counselor and as the Coordinator of Counselors. He was dedicated to helping countless people suffering from alcoholism and chemical dependency. He was an active member of the First United Methodist Church of Hallsville, serving on the Mission Ministry team even in poor health. Archie was preceded in death by his parents, his sister, Faye Deen Carlson, and her husband Leslie. He is survived by his loving wife, Sally; daughter, Cynthia Lanette Barron Castillo, and her husband Joel; stepdaughter, Sara Flemister Francois, and her husband Chris; the grandchildren he loved so much, Lucy Castillo, Collin Francois, and Austin Francois; sister-in-law, Yetta Halderman, and her husband Chuck; nieces, Jan Quinsaat and Judy Bell; nephew, Ron Bell and his wife Emily; several cousins including Tommy Anderson; David Anderson; and a host of friends. Archie was an outdoorsman and loved nature, photography, gardening, and his pets, in his last days enjoying his pet cat, Angel. The family requests memorial donations be made to First United Methodist Church of Hallsville, Longview ISD Foundation, Partners in Prevention, or Parenting Resource Center of East Texas.

The family of Archie Nelson Barron created this Life Tributes page to make it easy to share your memories.

Send flowers to the Barron family.