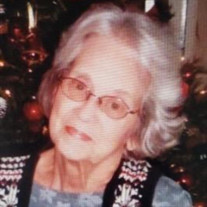 Graveside services for Annie Laurie Pirtle will be 10:00 a.m. Friday, Apr 8, 2022 at Memory Park Cemetery in Longview, Texas. Pastor Jed Whitaker of Enon Baptist Church, will lead the graveside service under the direction of Rader Funeral Home of Longview. Visitation will be from 6:00-8:00 p.m. Thursday, Apr 7, 2022 at the Chapel of Rader funeral home. Ann was born on April 10, 1934 in Marshall, Texas to Clifford and JT Dunn. Mrs. Pirtle passed away on Apr 3, 2022 after a courageous battle with Alzheimer's disease. She leaves behind an extremely devoted family. Ann was preceded in death by her loving husband Jerriel Pirtle, who she was married to for over 50 years. Ann has four loving sons, Steve and his wife Melanie, Richard and his wife Shannon, Mike and his wife Andrea, and Terry and his wife Terri Ann. She leaves behind 9 grandchildren and 7 great grandchildren. Ann grew up in Marshall, Texas and graduated from Marshall High School in 1951. She was a member of Glee Club and Student Council. She was honored by her classmates as Homecoming Queen in 1950. After graduating, Miss Ann soon met the love of her life and moved to Longview, Texas where she resided for over 60 years. Mrs. Pirtle was a stay at home mom until she began her adventure in the working world in 1979. She began her professional career at Manning Realty, where she ran the office for three years. She soon found her calling, becoming the parts & service manager at H&W Honda in Marshall. Known as "Mrs. Ann" by many loyal customers, she faithfully served the Hughes family for over 25 years. It was her pride and joy to serve in this capacity until she retired in 2010. She was often the first one into work and the last one to leave. She retired at age 76. She had a deep, loving relationship with the Hughes family. Mrs. Pirtle served on many committes at Pine Tree High School. She was actively involved in fundraising, PTA and the Pine Tree Athletic Booster Club. Watching her four sons in sports was her passion. She traveled many miles on road trips to follow her son's adventures in athletics. Her passion for her sons was evident and she held them to a high standard. This standard can be seen throughout the success of each son and the grandchildren today. Surviving grandchildren include, Steven Pirtle, Courtney Mendoza, Sarah Tutt, Andrew Pirtle, Tyler Pirtle, Brett Pirtle, Caitlan Bessinger, Travis Pirtle and Olivia Pirtle. Ann was a member of Mobberly Baptist Church in Longview. The Family would like to thank the Paloma Hospice and the service of Cora, Lori and Sarah. Their loving and tireless support was appreciated, as Mrs. Pirtle battled for almost ten years. The family would also like to thank Trinity Timbers and its wonderful staff. A special thank you to the Hughes family for their support and devotion to Mrs. Ann.

The family of Annie Pirtle created this Life Tributes page to make it easy to share your memories.

Graveside services for Annie Laurie Pirtle will be 10:00 a.m....

Send flowers to the Pirtle family.