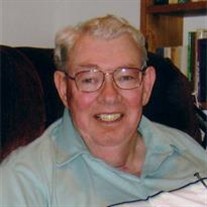 Funeral services for Andy Lee Dowdle, 75, of Longview, will be held Saturday, July 12, 2008 at 10 AM at Greggton First Baptist Church with the Reverend Bobby Moore officiating. Entombment will immediately follow at Lakeview Memorial Gardens Mausoleum. Services are under the direction of Rader Funeral Home of Longview. Andy was born November 12, 1932 to Leon Anderson and Tiny Pearl Dowdle in Van Zandt County. He passed away Thursday, July 10, 2008 in Longview. He graduated from Van High School where he was class president, voted best all-around boy, and was a member of the Vandal basketball and baseball teams. He attended Tyler Junior College until he was drafted into the Army where he served our country for two years in the 5th Armored Division at Ft. Hood. After the Army, he worked for Texas Eastman and retired after 35 years of service. He served as a deacon at Greggton First Baptist Church for many years. He enjoyed woodworking, had many pets throughout his lifetime, and had a passion for sports, especially Pine Tree basketball, the St. Louis Cardinals and the Texas Longhorns. He was actively involved with the Longview Boys Baseball Association for well over a decade where he won many little league championships and was a positive influence on many young boys' lives. He is preceded in death by his parents. He is survived by his wife of 54 years, Nelda, four children, Rick Dowdle and wife Deborah of Longview, Janie Phillips and husband James of Longview, Linda Nichols and husband Robert of Texarkana, Mary Grush and husband Anthony of Kilgore. He leaves behind his six cherished grandchildren, Cristi Phillips, Britni Banda and husband Blake, Nathan Nichols, Mallory Nichols, Nolan Grush and Braden Grush; a sister, JoAnn Barr and husband Don of Van, sister-in-law, Joyce Berleue and husband Frank of Willis, many nieces, nephews, friends, and his beloved dog, Mack. Pall bearers will be Chris Bailey, Darwin Cooper, Charles Farr, Roy Ottmers, Kevin Stagner, and Charlie Stansell. In lieu of flowers, contributions may be made to the Greggton First Baptist Church building fund or a charity of your choice. The family will receive friends from 5:00 - 7:00 p.m. on Friday, July 11, 2008 at Rader Funeral Home. A memorial guestbook may be signed online at www.raderfh.com.

The family of Andy Lee Dowdle created this Life Tributes page to make it easy to share your memories.

Funeral services for Andy Lee Dowdle, 75, of Longview, will be...

Send flowers to the Dowdle family.