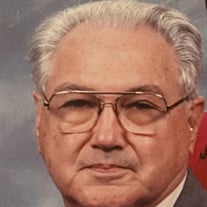 Graveside services celebrating the life of Allen Wesley Stone, age 88, will be held at 11 am, Friday, September 17, 2021, at Rosewood Park Chapel Mausoleum, 1884 FM 1844, Longview, Texas, with visitation at 10 am, prior to service. Mr. Stone passed away peacefully, September 13, 2021. Allen was born in Oakland, California, August 9, 1933, to Carl Walker Stone and Madeline Carvalho Stone. Allen’s family moved from California, to Illinois, then Georgia, before settling in Longview, as his father worked for R.G. Letourneau. Allen attended his last year of high school in Longview, graduating as a Lobo, in 1951. Allen proudly served in the United States Army during the Korean war, then attending Letourneau University, where he studied Engineering, as he had a natural gift for math and science. While attending Northside Baptist Church, Allen met the love of his life, Jean Stroud, whom he married, July 26, 1958. They enjoyed raising their two girls, Lisa and Kay, and spending time together, as a family. Allen had a long and successful career working as an Inspector with Axelson/USI, Lone Star Steel, and JW Operating until his retirement in 1996. Although Allen was known for being the strong, silent type, he was never afraid to lend a helping hand. Allen served as a deacon, taught Sunday School and helped with various committees through the church. Jean and Allen celebrated 39 years of marriage, prior to Jean’s passing in 1997. Allen always enjoyed spending time with family, fishing, playing a good game of 42, and relaxing in his recliner, watching a good western, basketball or his favorite team, The Dallas Cowboys. Allen remarried, following Jean’s death. He and his wife Elizabeth enjoyed traveling and chasing grandchildren from one event to the next and enjoyed spending time together. Allen moved to a retirement center, following Elizabeth’s passing, where lived until his health began to decline in his early eighties. Allen lived a long life, loving his family, listening, certainly more than he spoke, and most of all, resting in the assurance of Christ as his Savior. His favorite verse: 1 Corinthians 13:13- There are three things that remain – faith, hope, and love- and the greatest of these is love. Allen Wesley Stone is survived by his daughters Lisa Stone Cain and husband Andy of Longview, Kay Stone Doss and husband Ricky also of Longview. Grandchildren: Andrew Cain and wife Melissa, Matthew Cain and wife Olivia, Benjamin Doss, and Rachel Doss, Great Grandchildren: Madalynn Cain, Jillian Cain, and Peter Cain. In lieu of flowers, memorial contributions can be made to: Hiway 80 Rescue Mission, Longview, Texas. Special thanks to Pine Tree Lodge Nursing Center, especially, Lori and Connie, and Heart to Heart Hospice.

Graveside services celebrating the life of Allen Wesley Stone, age 88, will be held at 11 am, Friday, September 17, 2021, at Rosewood Park Chapel Mausoleum, 1884 FM 1844, Longview, Texas, with visitation at 10 am, prior to service. Mr. Stone... View Obituary & Service Information

The family of Allen Wesley Stone created this Life Tributes page to make it easy to share your memories.

Send flowers to the Stone family.