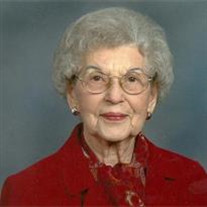 Agnes Smith Bassett, age 100, went to be with her Lord on July 12, 2013. Funeral services for Mrs. Bassett will be at 10:00am Monday July 15, 2013 at the Rader Funeral Home Chapel with Rev. Randy Scerolor officiating. Burial will follow in the Millville Cemetery. Visitation will be from 2pm -4:00pm Sunday at the funeral Home. She was born October 13, 1912 in the Oak Hill Community near Henderson to Dr. Albert O'Lee Smith and Esther Price Smith. She graduated Oak Hill High School in 1932 as Salutatorian of her class. She was a homemaker most of her adult life, but in January 1952 she and her husband Travis Donald Bassett, went into the grocery business on Hwy 43 about 4 miles out of Henderson. The two of them operated Bassett's Grocery for 24 years. Mrs. Bassett was a member of Hillview Baptist Church, having attended faithfully as long as she was able. She loved her church, her pastor and her friends there. Mrs. Bassett was an excellent cook, a good homemaker, a wonderful mother, and a devoted caregiver for her husband for many years before his death. In 1986 she wrote a book entitled "Memories of the Past" which was dedicated to her children, grandchildren, and great grandchildren for them to see the difference in her way of growing up in comparison to their lifestyles of today. Mrs. Bassett was preceded in death by her husband, her parents, her brothers Virgil, Edward, and Jimmie Smith, sister Robbie Sue Daughtery, Gladys Dunklin, Cynthia Gossett, Rosie Smith, Estelle Simpson, and Frances Adams, a daughter Linda Sue Wedgeworth of Shreveport and grandson Joe Calvin Propes of Carthage. She is survived by two sons Mack Bassett and wife Virginia, and Don Bassett, all of Henderson, and a daughter, Becky Propes of Carthage. Grandchildren Karen Medford, Keith Bassett, Randy Bassett, and Dwayne Smith all of Henderson, Allen Bassett of Liberty City, Janet Endsley of Gary, Kathy Semon and Angela Boudreaux of Shreveport, And Gary Wedgeworth of Whitehouse. She also has 17 great grandchildren and 7 great great grandchildren. Pallbearers will be Keith Bassett, Randy Bassett, Allen Bassett, Dwayne Smith, Gary Wedgeworth, and Ronnie Smith. Memorials may be made to the Hillview Baptist Church, and the Millville Cemetery.

Agnes Smith Bassett, age 100, went to be with her Lord on July 12, 2013. Funeral services for Mrs. Bassett will be at 10:00am Monday July 15, 2013 at the Rader Funeral Home Chapel with Rev. Randy Scerolor officiating. Burial will follow in the... View Obituary & Service Information

The family of Agnes Smith Bassett created this Life Tributes page to make it easy to share your memories.

Send flowers to the Bassett family.